Had an odd visit from this truck this morning at 5 am, never seen before this location. Noise, idling (illegal in MA), parked in a strategically aggressive position (which I've noted other kinds of vehicles do this for protection or to claim territory with intimidation. Guess which ones-right. This is all being brought back from the post 9-11 war zones-military tactics being utilized domestically.)

When I pulled out the phone to catch on vid suddenly they thought better of it and went away very quickly.

Based in AZ
They contribute to both political parties.
They merged with Allied Waste which involved The Blackstone Group.
The merged company now simply known as Republic Services is owned by Cascade Management, owned by Bill Gates and Larson.

Any other pertinent facts leading to asshole-dom unknown. Maybe the guys just a jerk all on his own.

------------DISCLAIMER-------------
No emails are sent by me to anyone or any company or entity due to the information on this blog. I am a public figure and this information can be accessed by anyone and used against me using my name.

Any arrest or other actions resulting in further legal issues or denial of my liberty will bring the most dire legal, political and social consequences local and any other judicial system wishes to imagine.
Don't even think about it. 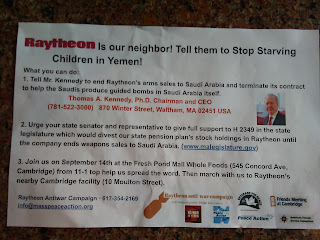 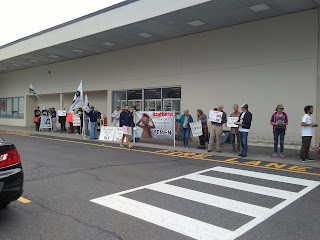 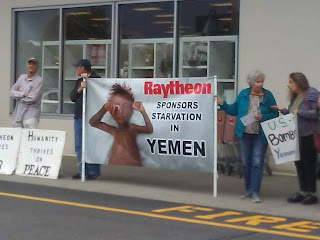 This group consists of a few different activist organizations. Vets for Peace are there.

They are looking for more people to gather and they are going to Raytheon in Alewife later.

Please join them and share your knowledge and presence.

INFILTRATORS, AGITATORS AND SABOTEURS NOT invited.

How Anti Terrorism Is Being Used To Move Against Activists

MORE THAN 160 ENVIRONMENTAL DEFENDERS WERE KILLED IN 2018, AND MANY OTHERS LABELED TERRORISTS AND CRIMINALS:
https://theintercept.com/2019/07/30/criminalization-environmental-activists-global-witness-report/

ENEMIES OF THE STATE?
How governments and businesses silence land and environmental defenders
https://www.globalwitness.org/en/campaigns/environmental-activists/enemies-state/

Amnesty, morally corrupted?
How a once great organisation completely lost its way:
https://www.spectator.co.uk/2018/05/amnesty-morally-corrupted/

When Amnesty International concerned itself with campaigning on behalf of individual and identifiable political prisoners of regimes of whatever political colour it did some real good.

However, it now appears to have become an expensive exercise in wholesale and futile virtue-signalling, with some highly dubious choices of targets. If it is still campaigning for individual prisoners, one doesn’t hear much of this.

It comes months after a damning report into the wider Amnesty International organisation warned of a “toxic” working environment and widespread bullying.
The review was ordered by its head, Kumi Naidoo, after the suicides of two staff members last year, Gaëtan Mootoo, who worked in the Paris office, and Rosalind McGregor, a paid intern at the Geneva office.

It pointed to a workplace culture of bullying, nepotism and an “us v them” dynamic which threatened the organisation’s credibility as a human rights champion.


Amnesty International has like every other organization that formerly did actual good and caused real change on this planet, now in a globalist world, been 'overhauled' by suspect persons involved in politics (??!!) and government to now be simply utilized in the world of disinfo and psy ops. Infiltrated. Is there anything that isnt? Well there is. Which is why you dont know about any of them that actually do have a genuine moral compass remaining.

It isnt that these issues arent important or relavant or real. Its that theres forces co opting the activist community so that they can be controlled. I think thats what everyone whos cynical about these issues is upset about. Why doesnt anyone remember COINTELPRO? East German Stasi? Russia? China (who we are doing business with and allowing to buy up alot of American land. Entire cities in the midwest burnt out by jobs going to ironically-China.).  Thats what thinking people are worried about.
by On_GangStalking clock 7:19:00 PM No comments:

Like It Is with Gil Noble: Interview with COINTELPRO FBI Infiltrator

If anything occurs while trying to clear my name and exercise my legal rights video testimonies will be released revealing every embarrassing detail. And there's documentation to back it all up. It's either done quietly thru proper channels or it's put out there for the everyone to see. It's up to you.

U can make as much noise as u want or smear or slander or have a mob as big as you want. It didn't change the laws of the USA nor does it make me wrong. Might does not make right no matter how much u try.

U r still wrong. U can't force people to accept corruption no matter how hard u twist their arms.