Central Sq Cambridge. Mass ave and Magazine st/Prospect St stop light. A black couple in a wagon type vehicle just went by lic plate said " senio2" with american flag colors on plate. Dark color vehicle. Man driving woman in passenger seat. I looked up as they were departing from stopped at light and noted she had mini video camera and was filming me stirring on bench at bus stop. Headed towards Harvard Sq.

Oh and mr 2130i or l lic plate thinks he owns the neighborhood. Nosy as hell. To overt to be a perp...old guy, black, dark blue compact car. Likes talking on his ear piece to cell phone alot.
He's goofy enough for community watch that's for sure. Lemme show u what I look like sitting here: 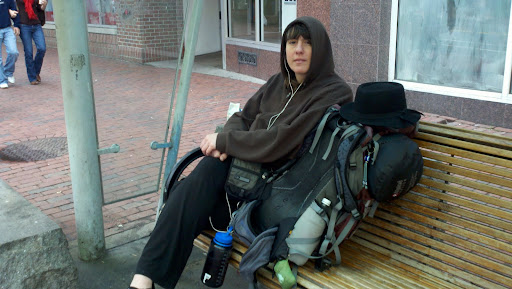 I am definately a long time Targeted Individual. I usually don't look this 'homeless' or sloppy but I didn't sleep much.

There are two other possible reasons I might be suspect sitting too long on.a bench in Central Sq Cambridge MA: Im not drunk or Im not black. LOL.

By the way I published this 10 min ago and it failed my service was interrupted which is ridiculous in the middle of a major city with a smart phone. Central Sq area seems to be able to do this and only at certain areas if MIT do I have video footage that comes out as unreadable. The interference with cameras and.computers during Bush was much worse.