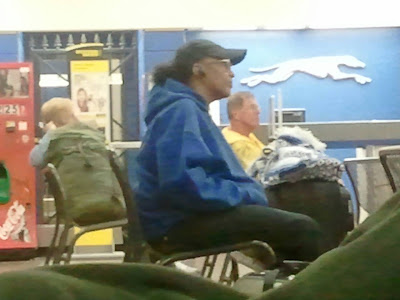 Perp possibly. Part of a small group.  They used alot of space mobbing and appearing to talk about the TI.


Two male blacks got on a bus right when we arrived that i saw doing very overt perp behavior like making jokes about the Target, talking about the person and laughing at me.


The janitor took an unusually long time to clean the bathroom which made  it a great excuse to stand in front of thw row of phones for a few hours which was of course where i was going to set up to rest on floor.

I eventually made racist comments which of course the all black mostly male perps reacted to by seeming to leesen their control that was making me reaxt to begin with which of couese then conditions me to use racial slurs and insults as i am conditioned to believe this will lessen the stress of the harassment.


THE REASON TARGETS DO WHAT THEY DO AND REACT THE WAY THEY DO IS TO MAKE THE GS STOP. TIS ARE CONSTANTLY  trying to see what works to STOP THE TORTURE.


The psych warfare system is smart enuf to manipulate the Target into choosing behaviors, reactions and expressions that will serve their agenda like make the TI choose racism as best self defense or do to things that will discredit them publicly.


Ive been experiencing down south here for this trip that black males  are present who are doijg what happened in San Diego-my feeling as ifbI am being sexually contacted by that person wothout direct communication or touching. A kind of psychic rape in a public space...ive documented this experiwxe years ago in  sd, CA.


Like other Greyhound perp groups there seemed to be a white older male present earlier as part of the group but i cant really say i am100% positive about this.


Individuals will walk by and say somethng as they go by us. A small, uninteligible word or two.


Black females have been trying to get me to go down into a downward spiral all day. I avoided it early on by moving our seats. But by this time tonight this female's stares and disapproving looks along with thw psychic vampire type males who were against the phones in my space, their mission seeming to b makijng me uncomfortable, has gotten to me.


Trying to use sexual arousal as a weapon and also trying to once again coerce me to 'get with' a black male.


One was on the bus-using this voodoo type hoodoo shit and he was also constantly taking up space by having to sit right behind us in the last seat,  talking loudly on the phone, playing rap music loud in earphones and eventually singing along with his music.


I felt some people on the bus knew what was going. I just tried to ignore it even though it wss obviously disturbing to me and other passengers.


The guy i am with is pretty useless and they know this. They also knkw he uswd to bw jn a long term relationship with a black woman.


When i finally got the camera out this one guy in orange who had been space mobbing, being critical of me with dirty looks left IMMEDIATELY.