Omg this is so ridiculous. Im being messed with on the commuter rail by a horrid old Jewish lawyer sitting at same table as me and right across from us are two portly detectives. (And I heard a camera snap from this guy's phone as he moved it in my direction then away so I returned with the same.)

One of two detectives to the left of me and the old lawyer). 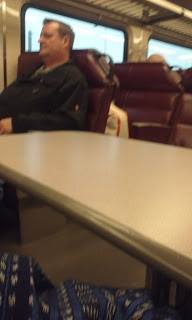 It seemed I just came about this seat by happenstance but.I guess enemies are everywhere when you go against the system as I do.
It would seem logical that  law type people feel comfortable sitting near each other so that would explain the seating.

Thot the lawyer (or this guy pretending to be one) was going to have a anxiety attack once two more 'common' people sat down at the table with us. Im glad they did becuz it broke up the three men being able to mob me.

This is whats wrong with the system specifically this area of the country. Elitism runs rampant. And for some reason the lawyers and judges in Boston feel they need to be parochial by making moral judgements of their own when they are doing their jobs. (Part of rhe intimidation I think, or hes just an ass was the lawyer on a phone call stating that a female client wasnt getting another trial and that " She deserves it". Uh, that's for the judge to decide. Yer job is to play your little wheel in the clock or machine that is the justice system.
Ive been around long enough to know that when someone talks shit like that jes probably guilty of some kind of no good himself or hes helping to cover for general corruption in the city or town etc.

If you are comfy in Boston then you are ok with an area of the country that has made a good part of its money by doing business with people who kill and are criminals.

Not to be confused with hiding kill for profit companies like Raytheon and parts of MIT etc behind oh so good and puritanical institutions like Children's Hospital and the medical schools that help people.

This area wasnt so insufferable in the old days when everyone was more honest in what the place was about but nowadays STILL hiding the same corruption. Adding to it the horrors of the last two administrations while being pious and self righteous about low level crime, 'quality of life' issues like homelessness and anyone or anything that threaten this new disgusting establishment consisting of everyone living in denial and diverting attention elsewhere (like YUPpies or uppity conservative Hipsters) and of course anyone poor or desperate who wants to play House slave to this agenda.

Ive lived here too long to fall for this Catholic-Puritan shaming crap. Its the same game they played with the witch burnings in Salem Village (Danvers MA).

The northeast is capable of some.very good deeds and a strong sense of justice but it has an almost English heavy hand attitude towards anyone who wont be destroyed by their designs.


All of these guys are older, one of the detectives more middle aged.

All I can say is dont worry guys, retirement is coming soon. And isnt that all that matters? Hmph.

Ive actually seen older people in on this in some authority that seem to be striving for one more year and seem to not care the things they've done to people over the years and will keep working with this system until that day comes.

Its like part of the work day for them. It genuinely doesnt bother them at all.

We can only hope that, in the long years after they settle in after retiring loses its allure that as bad health and age sets in, memories surface. Conscience arises...and years od suffering follow. Until on their death beds they know they have to pay. But its too late.

Its been researched that after death all we experience is just from our own minds. Residual brain activity in the grave.

And unlike a personal belief in an afterlife that can be contested or dodgrd by a strong free Will- you cant escape the knowledge of your own memories.