Welcome to the world of the TI. Welcome to what its like for MK Kids and SRA survivors for a lifetime.

Please be advised that this written work is theory. It's theorizing, pondering and amateur research. For legal reasons I state that I have no actual belief in these theories as fact, if I did I would have sought legal recourse. Until that occurs this blog can only be considered theory. If it does then any and all actions PAST AND FUTURE that have been taken against me during the years producing this work will be labeled war crimes under international law and any other legal protections that apply.
My prior disclaimer stated that I'm often sleep deprived when posting due to my demanding alternative lifestyle as a Traveler and activist. I've worked as hard as any executive and have suffered the same stress of a huge workload. This should be taken into consideration when viewing my posts and vids on the connected YouTube channel. I am a writer, an activist and artist. I claim my RIGHT TO EXIST legally under US Constitution and international law.
This is an educational blog for awareness as well as sometimes a telling of candid personal experiences to demonstrate theories as they might be experienced by a person who theoretically is existing under such conditions. Thus the 'candid' expression, poetic license and marketing myself as product or character. This is NOT a journal or diary.
Being a reasonable person of sound mind if I had concerns for my safety or others I would take responsible action for self care as my established medical history can demonstrate.
Any actions taken against me by others questioning my sanity or competence based on my produced work will be construed as activist/dissident intimidation and whistle blower retaliation and proper legal action will be taken against you by my family and support system.
Be warned that no further interference with my production of meaningful work as an artist and activist will be tolerated.

Officers Posing As Store Employees: What If Cops Is Corrupt, On Black Ops Payroll, Etc? 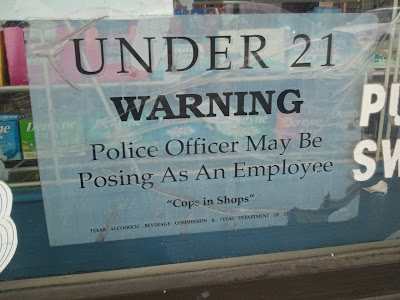 This is just like police officers posing as passengers on public transportation.


It at least shows evidence to a stubborn public that deceptions are part of their daily lives.


Why wouldn't cops do such things? They are supposedly already more slick than criminals right?


No one ever goes further and questions the abuse of power possible with such covert measures being taken for the public's supposed 'safety and well being'.


The entire country is now run by covert means. Its no different than a mayor and the sheriff in a small town running the town thier entire lives. Its simply on a grand scale now.