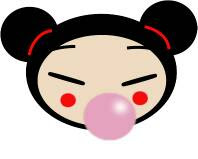 PUCCA decal I put on my old laptop's webcam eye as well as I had stuck on a webcam eye on a Mac in MassArt.


Madonna came out with this photo not long after alongside a Virgin Mobile campaign where the model also posed blowing a bubble and the ads focused on going crazy or dont go crazy, along those one liners but it was really obnoxius. I had, at that point left Virgin Mobile for Verizon. I think I posted just how pissed off the guy at Virgin sounded when they knew I had smartened up and was cutting loose from them.


Pucca was so awesome when she was just a little Korean creation then she almost disappeared and Disney supposedly picked the character up. I liked her being marketed back into existence but Im glad I missed the TV show or movie that Disney did when they marketed the hell out of it.  My point is I wonder about the Disney thing...I dont however wonder about Virgin Mobile or Madonna as theres no question they would steal from anyone or do anything to anyone to stay successful.


(Just looked it up. Thats right the ad says "...heres a CRAZY ONE."  "After years of STUPID phone plans, here's a CRAZY ONE".


'Stupid' and 'crazy one' kinda stood out becuz the perps in person in public spaces stressed those two words for years in this ongoing campaign. ) http://www.trademarkia.com/dont-be-stupid-go-crazy-85075745.html


The main purpose of this psy op is probably to again in general  let the Target know they are being watched but specifically to punish any kind of attempt at self protection or defense such as covering the webcam eye.


In St Louis years ago a perp made fun of me by mentioning that there are camera holes on some computers u cant see and that webcams can be activated or turned on. I never forgot that...why give them anymore opportunity if this is indeed the truth?