Harassmemt On Commuter Rail Bad As Usual But Heavier And With Nastier Perps On Route From RI to Boston As Opposed To Boston To Providence RI (why?)

This is a perp on the MBTA commuter rail who was doing intimidation. I always get harassed out of RI heavily by true scumbags as well as the Amtrak jerks I posted about in last post. 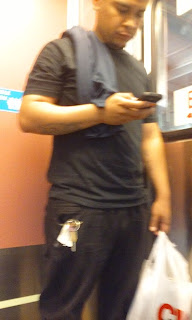 A young adult age female was in on it too, blue eyes dark hair-taking his seat in order to charge her phone but she was just a perp also but she had something about her that wasnt quite as fucked up or tied to the system like the train employees in on it and the violent psycho who is in the photo posted here.

I actually gave her a little directed conversation telling her how it really works and that  theres hope for her becuz i sense shes not as screwe up as the train employees (who are notoriously the biggest assholes in gang stalking whether they work for Amtrak or the MBTA. They have this arrogance based on the power of the train system in America and Carnegie all those robber barons. Ive heard them say things that sounded like the had total hard ons for the power laid down on those tracks.

This is actually what makes the perps so dangerous. They are total worshipping cult controlled psychos who are very into the POWER of the US military or THE POWER of the tech or tools of war and the contractors or THE POWER of the banks and banking or the POWER of any part of industry in this country.
Like worldly power groupies. Ive met them as perps and Ive met the military and police groupies and wanna bes and theres also the Cause Stalkers who are the same profile-they function off the POWER of this Abrahamic god but it seems that psy ops tech is used to make them believe that 'god' is talking to them or their leaders. Again dangerous people.

If this is the definition of an American citizen then I guess my planning to leave the country is the best idea.)

Whats most unbelievable is the arrogance of some perps.  The violent types like the kid here is expected becuz thats his nature. Which is why theyve utilized him in the first place.

But the Amtrak police it depends on the area.

RI is odd it seems to soley depend on the exact location and whats around.

I think i get harassed coming out of RI as a sort of attempted conditioning to keep me in MA exclusively. Becuz its become such a damn prison.
Cambridge is horrible and i dnt know about Boston.

This is an older woman with a male. He was doing harassment tactics. They had fold up bikes and backpacks. 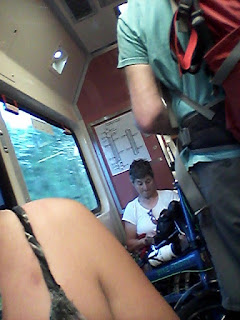