No disrespect to the families or the dead but this theory has to be looked at.

This is to add to the last post on what I found on Sandy Hook massacre. It seems there's a profession called 'crises actors'. This website page further questions the validity of what happened in Newton, CT.

I was watching another vid on the subject. One of the commenters noted an older male flashing the sign of the horns in a still photo on CNN that was an old family photo of the teacher, Soto, who was killed.
Photo of still: 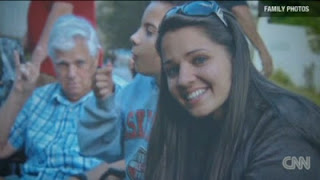 How creepy is this? I highly doubt that this guy is a TX Long Horns fan or he's deaf saying "I love you". Its always possible however.
The photo is on this site, Before Its News. The link above is very revealing, if its correct in its research.

(I dont think that the lawyer pictured on the above link is the Greenberg/Phelps female in question.)

The good thing for TI's about this is that we can finally put to rest the wondering we do that burns our brains and hearts out over time concerning exactly WHO Gang Stalkers are. Its obvious that they are in part, actors. Whether they work for intelligence or other parties is a whole other question but its comforting to finally see something put together like this. Its obvious from this incident and my or other TI's experiences that they have full cooperation from the government and corporations.

So the many weirdos we deal with, strangers who seem to know us and hate us- always the Starbucks barister who's new that none of the locals know who seems to be targeting you all the time, the cashier you see working in a convenience store in L.A. Union Station that you know you've experienced gang stalking harassment from in San Diego area, years ago.  Time and time again TI's, especially Survivors have to deal with the haunting, crazy making occurences of being so sure you've seen or been harassed by a person before that is now in another location which doesnt make sense. It also is interesting to note that when you do recognize the person and you do certain things to test your theory, these people you are SURE are perps do not react like normal people would to your actions.  Perps never react like normal human beings to your actions or reactions.

I recall a MA state cop was doing a regular route of harassment consistently in one location I frequented to make purchases a few times a month when I lived in Brighton, MA where this campaign went 24/7 on ruined my life.  One day I just got sick of it, still not knowing what Gang Stalking was.  I freaked out and went up to his window and screamed asking what do you want from me and this sort of reaction.  His windows were closed.  His reaction was not normal.
Any other normal police officer who was not enganging in harassment or up to no good and was dealing with a citizen who was behaving  as I was would have looked over at his passenger side window with some suprise and taken care of the situation including trying to find out what was wrong with me, if I was the one who needed help or if he was the one who needed backup.
This statey simply stayed hands on the wheel firmly and looked straight ahead, then drove away as if nothing had occured.

Thats the thing about perps. They dont behave normally and they dont react to a Target's normal reactions in a return normal fashion. IF EVERYONE WAS INVOLVED WERE NORMAL TO BEGIN WITH.

They do however behave normally for a network of people who are trying to make someone degenerate mentally, physically, spiritually and emotionally and deny any actions were taken against such a person to cause such a degeneration.

This would explain how people who are part of churches and the like can be part of how sick this is. They are simply acting. They dont believe in anything they present themselves as as much as any other actor who is playing a part. There's so many perps around Cambridge, MA- so many church going people who are overt perps..I think its more likely they look to Harvard U, MIT and the power structure etc for where their loyalties are as opposed to the church they are seeming to frequent.

This perception certainly makes being targeted a whole lot easier. TI's know whats going on but this system always makes it so you dont really believe your own judgement until your are shown exactly how the illusions are pulled off.
Which is very sad becuz no one should have this much power over other people- not individuals or an entire nation.

I had trouble with the above link becuz it only claims the people pictured are a family called Greenberg in Florida and that those are photos of the Greenbergs. It could easily be done that Phelps' photos could be hacked and stolen then this conspiracy theory made up- maybe by right wing gun advocates or maybe by sick people wanting to screw with the emotions of traumatized people.

However, the people interviewed in CT do have suspicious expressions of emotions. Watch some of the vids related to the theory of a hoax on YouTube and you'll notice that's true of many of the interviewees.

I also found many other sites on what is referred to as the hoax or cover up of Sandy Hook.
http://www.insanemedia.net/sandy-hook-actors-who-is-jennifer-greenberg-sexton/840

This may all be a hoaxed conspiracy theory. Perhaps to divert away from legit questions about the inconsistencies in the Sandy Hook shooting.

One question remains: What is this man, referred to in this conspiracy theory as Michael Greenberg, doing flashing the sign of the horns or 'devil sign' in a family photo of the now slain teacher? And why did CNN find it necessary to post a photo that was so obvious?
by On_GangStalking clock 10:39:00 PM