Goodwill Store In Allston MA On Commonwealth Ave Is Out Of Control GS By Foriegn POC, local African American 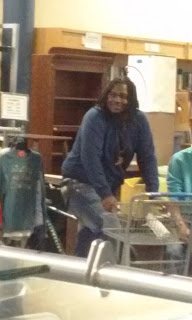 This kid stands around looking at his phone or someone elses. Gets.reprimanded by staff he screws up when he does do something.

He was standing there doing both gestures Im anchored to in the sequence thats very common nowadays.

I was minding my own business looking for clothes. They tried to mess with me the second I entered and I
quietly advised 'dont mess with me'.

Also they have racist hiring practices. All third world foriegners and blacks and they talk shit about you in
their language. EuroAmerican employees only showed thier faces after I took this pic of him and posted this on this blog. ITS AS IF THEY WANTED ME TO BE MOBBED EXCLUSIVLEY BY PEOPLE OF COLOR SO THAT I WOULD REACT WITH RACIALLY CHARGED CONTENT and anger or indignity of course. More frame ups for 'racism'.
.
Its ironic that you immigrate to America becuz or WAR CRIMES in your country but then have no problem
committing WAR CRIMES on American citizens.

It seems that false battlefield type environs can be created in public spaces now. They can also be halted just as easily...if they get in danger of exposure to the public.