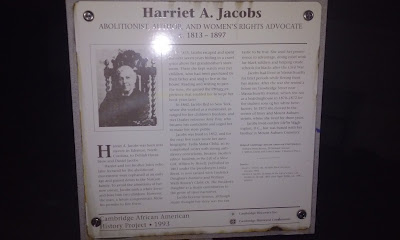 I came upon this last night. I ran from Providence due to being harassed too much there and it being so full of gang activity the culture is depressing to me.

I realized by reading this that the way I live that the perps and society at large makes me feel ashamed of or uncomfortable with lately is actually quite normal for a person BORN INTO SLAVERY, TRYING TO GET FREEDOM and working on activism for the freedom of other slaves and trying to tell my personal story and this world of slavery to the public.

Harriet Jacobs.
She went through the exact same things Im going through to fight and gain freeom and doing things Ive had to to comprise with an oppressive system or authority to survive.

I now realize the value of keeping history alive like this. A person wandering at 2 am might need to read this and perhaps only at that time in the quiet could a person see something like this so clearly without the noise or distraction of the modern world and too many people.

I am now thinking this is whats behind the destroying history and its symbols everywhere.  They are promising perfect new world yet are actually trying to ensure people cant recall a timw of true freedom of have history to recount how oppression was broken through.

This is olde Harvard. And they understood that the oppressed would seek something at a place like this. And we might need to see this. We might be the future Harriet Jacobs.

What made me think and connect was the 7 years living in her grandmother's crawl space above the stairs. Living as a targeted person being 'homeless' like thus is akin to that kind of restriction though I am forced to wander and she to live in confinement. They are both extreme.
And her having to keep moving to different locations bases on changing conditions. Having to use her female qualities to barter.

It also made me look at the African Americans involved in oppressing TIs differently.  I always knew there were blacks who helped keep slaves like her from being free or to help hunt her down and return her to enslavement but I never related to them like that as I did after reading this. Never did I see them so clearly.

If you are a Targeted Survivor of mind control programs or cults or ritual abuse you are doing exactly what you are supposed to. Even if society doesnt understand.

What I found so predictable was when she wrote her autobiography people found her account of slavery "too fantastical". No they f*cking didnt. They vlaimed it was so they could hide the damage being done until slavery was nicely cleared away so there wouldnt be public outcry just as they always do.

Either that or the public were in denial knowing better than to bite the hand that feeds.
by On_GangStalking clock 9:27:00 PM