This older white male tried to engage in tactics while I was standing outside and I just ignored him.

One of the tactics here is to try to get my attention with stupid questions or "oh I thot u were someone else" (black guy in McD today.)

Heres his plate. Its a US plate: 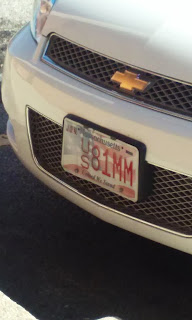 Waiting for a woman maybe his wife that was in Walgreens.

Typical harassment by people trying to beg for food money but I just tell off a few and ignore everyone mostly becuz alot of them are just YUPpies or new money who have horrid middle or upper middle values and genuinely dislike beggars and will make fun or say "get a job". (No one does that in big cities anymore but RI is a fish bowl and this island is small so the mind set is also small.)

I will tell people Im a TI and activist but it would be better to get some materials printed up to hand out. Id rather light a candle than curse the darkness (inform people instead of having to tell them off).

This could be being done by people working off a cover story or it could be anti vagrant or homeless campaigns as I've noticed over the past few years the Dirty Tricks Dept type covert activity has been being employed in cities and towns to get rid of Homeless people.

Well whatever stupid power tripping bs they are working off of they are now put on front street for the whole world to see.

The Walgreens employees here are fat bitches who were doing tactics the second I walked in. Who are also ineffectual at their jobs becuz they couldn't find what I was looking for (gsng stalking ensures people who cant make it on their own merits get what they DONT deserve in life. While those od us who would do wonders if we werent kept down have to live in the street.)

The staff in there handled me as if I was mentally incompitent and needed to be watched and talked to like a 90 year old woman or an idiot. As i checked out another employee a fat white brunettw with dark eyes had to come over and watch but all she did the entire time was smirk like an asshole and run her hands through her hair while the also fat half black woman rang me up and talked to me like an imbecile.

(Just as I write this the manager came out and said I have to leave as I was making everyone nervous. The girls told him I was making threatening gestures. I had a talk with him about them and he was ok. Have vid will post. So they just tried to cover their asses AND stop this post.)

Saying to someone as you leave "gang stalking is for losers" isnt a threatening gesture. Go back to law school you horrible little urchins.

THIS IS WHAT THESE PEOPLE DO. They infiltrate businesses and mob Targets or whoever else while the boss isnt watching and then whine about the victim after the person handles it as best they can without getting really upset.

He also told me that those two were usually the best at customer service. Of course. Everyone else isnt their prey. People like me are. And btw in this city of Middletown Ive seen this being used- the super excellent customer service persona and u can tell it's totally fake. Of course they usually do gesturing tactics but this time they and some customers mobbed me and it was not only too much but they caught me off guard.

Theres nothing crazy about me. Make no mistake Im as sane as they come.

So it's a simple game of Create a Problem-Solve a Problem.

Handle someone like they are nuts or deficient and at the same time get them agitated then act victimized when in fact you are the cause.


This is a game this system plays on every single Targeted Individual in this country. However I've never seen it played so stupidly as here and with such arrogance.

Btw miss Diversity couldn't find my product I wanted after looking all around the store ( i came upon it) and she also has a name tag that consists of her name written in orange magic marker on the plastic cover on a lanyars her name tag is supposed to be in.

Well, at least the thing shes wearing to id herself is really hard to read...which is probably on purpose but its made to look like an innocent mistake.

We all know a mere walgreens employee especially a poor black girl isnt capable of much more.

What a great cover in society to be a domestic terrorist doing psy ops eh?