Theory On Why Harassment At Walgreens In Middletown, RI Was So Vicious-US Military Might Be Friendlier Than Corporate Connected Airports

Theory on why get horrible treatment at the Walgreens in Middletown RI (near Newport) but its livable near the Walmart just south of there.

If you look at the map the War College is near the Walmart on an island to the left (the star to the left of the 'G' in "Google"). 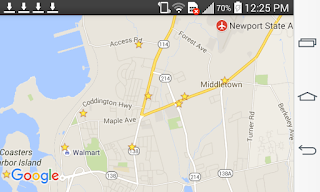 The Walgreens area I got severely harassed at is near an AIRPORT. One of the businesses there even calls itself 'Airport Cleaners' a dry cleaner or some such business.

Airports are Im thinking covered by HOMELAND SECURITY. In the past Ive noticed that a raduis around an airport id usually secured or monitored by some sort of security force...which usually results in my getting my ass handed to me when I go to shop, walk through or pan handle in such areas.

So saying that 'gang stalking' is cults or 'The Government' is incorrect.

Theres so many different parts to the US government and much is outsourced or even semi privatized now.

Long gone are the days of The Govt and rhings being that simple.

Ive noted that the harassment has different rules in varying states. Thus all of this must be under legal penning somewhere and somehow or it wouldnt be done systematically and with cut offs or shut off times.

Its all made extremely complicated so that simple average people no longer have control over their world.

Kind of like asking Alan Greenspan abouy economics when you thought you were pretty educated on the subject. According to people who have done just that at a certain point he goes off in directions and theories that average people just cannot follow.

And of course this seems like a diversionary tactic or evasive moves.

To hide the truth you get drowned in circumstances above your understanding and knowledge while the elite gain and keep control by superior knowledge.
by On_GangStalking clock 12:45:00 PM