The Unkindly Art of Mobbing (In Academia) 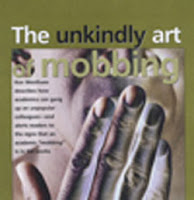 Ken Westhues describes how academics can gang up on unpopular colleagues — and alerts readers to the signs that an academic "mobbing" is in the works.

"Leyman studied the nonviolent, polite, sophisticated kind of mobbing that happens in ostensibly rational workplaces. Universities are an archetype. If professors despise a colleague to the point of feeling desperate need to put the colleague down, pummeling the target is a foolish move. The mobbers lose and the target gains credibility.

The more clever and effective strategy is to wear the target down emotionally by shunning, gossip, ridicule, bureaucratic hassles, and withholding of deserved rewards. The German word Todschweigen, death by silence, describes this initial, informal stage of workplace mobbing.

This is often enough to achieve the goal. Many targets crumble, flee to a job elsewhere, or take early retirement. Others surrender to the collective will, behaving thereafter like a dog that has been bested by another dog in a fight for dominance.

If the target refuses to leave or acquiesce, the mobbing may escalate to a formal outburst of aggression. Mobbers seize upon a critical incident, some real or imagined misbehavior that they claim is proof of the target’s unworthiness to continue in the normal give and take of academic life. A degradation ritual is arranged, often in a dean’s office, sometimes in a campus tribunal. The object is to destroy the good name that is any professor’s main resource, to expose the target as not worth listening to. Public censure by the university administration leaves the target stigmatized for life. Formal dismissal with attendant publicity is social elimination in its most conclusive form."
by On_GangStalking clock 10:56:00 AM